A record 146 teams entered Shaldon’s annual Boxing Day race around the village pubs with hundreds more watching the event along the route.  This year the variety and imagination, not to mention the effort, that went into the fancy dress costumes was
a sight to be seen.
Entrants gathered at the Ness and paraded around the Ness Green in front of judges, Sally Clarance and Anne-Marie Morris MP, before prizes were awarded for the best outfits. Choosing between the costumes was not easy as The Wizard of Oz and his coterie of friends joined Vikings, Crayola crayons, Popeye and Olive Oil, bananas and ducks to make 2012 one of the best years yet for creativity and humour.

Fancy Dress Prize winners
Villagers scoped all the prizes in this year’s fancy dress event with top prize in the under 18 category going to Martha Spencer, eight, and Laura Taylor, 13, who entered as Sky’s -  Le Tour de Shaldon.  Second prize went to The Nerds, Verity Collyer and Jemima Amstad, both aged 10.
The best dressed adults were Pauline Harbert and Kerry Quartly as the brilliant Shaldon Puppets, and second prize went to The Shaldon Ark, Karen Hadley and Lyz Dorey, which, given the rain, proved to be a very topical entry.
The Group top prize was won by the Morrisons Dancers, Elaine and Robyn Burnham, Hannah Woolnough and Carly Cook. Second prize went to the tasty Christmas Selection Box with Tom, Pauline, Ella, Nikki and Zoe Constantine and Russell Hares dressed as your favourite chocolate treats.
SL and Deborah Ashleigh-Thomas came first as Death Us Do Part in the mixed age category, and second prize went to James and Will Powles as Santa and his Little Helper.
By this stage the rain had set in but did little to dampen spirits as compere Chris Clarance  signalled the start of the race and everyone hobbled, stumbled and raced off down the hill with their legs tied together.

The fastest pair back was Batman and Robin, Roger Easterbrook and Lee Turner, from Paignton who zoomed around the five ‘pit stops’ in just over 13 minutes.   The fastest ladies home were Irene Hewings from Torquay and Debbie Drake from Dawlish and the quickest children were the Olympian Hockey team comprising Sam Evans and Archie Miles.
The last teams home finished some time later and many didn’t even make it past the first pub stop, but fun was had by all.

Well done to all who took part for supporting this unique village event, we are constantly amazed at the quality of the costumes that people put together.

And a big thank you to those who helped marshal the route and man the pumps at the pubs and to all the landlords for supplying sustenance for the teams. We look forward to seeing everyone next year. 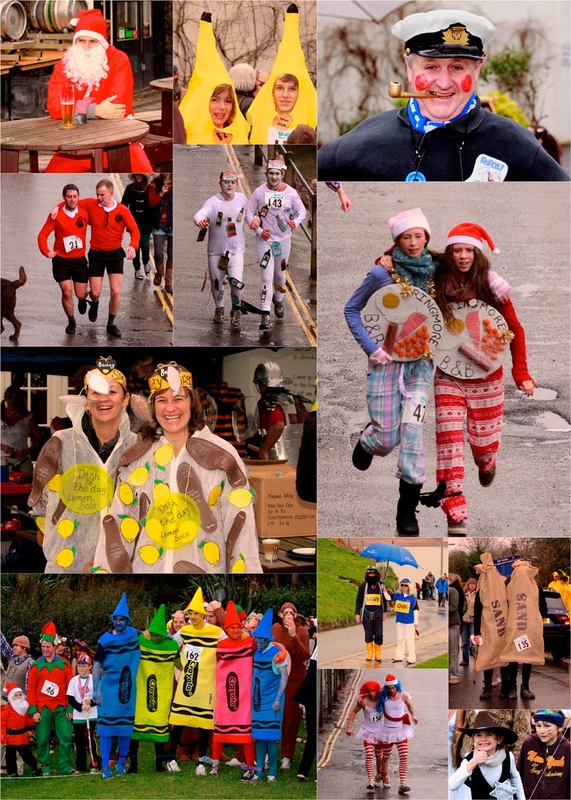